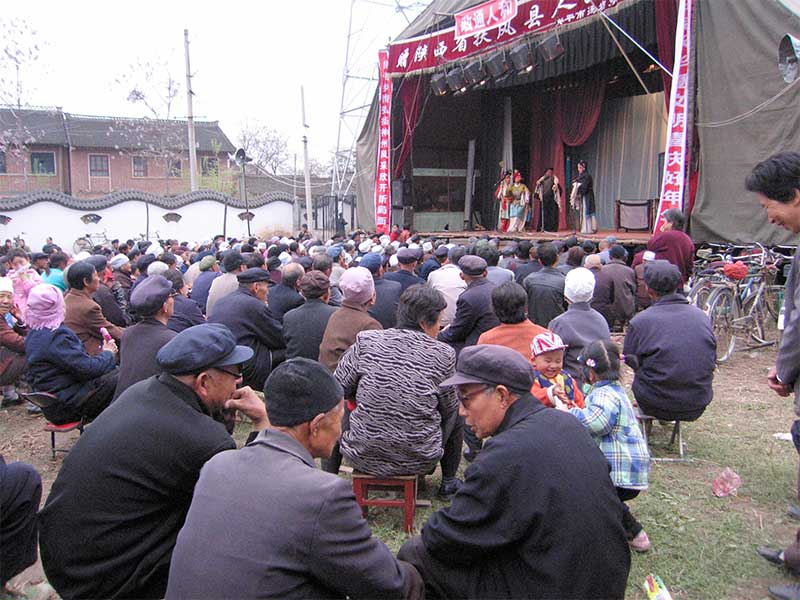 I am not an opera lover, but weeks saturated in it in the poor Chinese village of An Shang captured my emotions and helped me to appreciate it a bit more. One night, villagers gathered in a courtyard to welcome visitors. At the urging of those around her, one woman stood and took the microphone. Though reticence flickered across her face, her strong voice soon filled the courtyard.

A few musicians slid into the rhythm with two-string erhus, a drum and rhythm sticks while children and adults tapped their feet and swayed to the music. One farmer after the next followed with their favorite opera songs. For me, the dissonant tones that stretch across the Chinese pentatonic scale, built on five notes to an octave, were difficult to enjoy, yet I was captivated by the villagers’ enthusiasm. 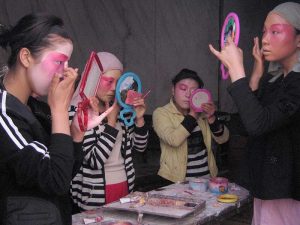 Toward the end of the evening, a middle-aged farmer stood and clutched the mic. His face taut, he poured every fiber of his body into an opera selection. Piercing, his voice rose to pitches I had never before heard. Exhausted, I let the sounds soak into me. I was glimpsing the soul of China.

Later when I asked a local friend, An Wei, about his 1950s childhood, he spoke enthusiastically of the market fairs in neighboring villages where they watched operas performed by traveling troupes. “They told wonderful stories and histories that everyone loved. We kids loved the characters and their colorful costumes.” For weeks after a performance, An Wei spent hours drawing and painting the fascinating characters, making sure the face colors were correct – white for a bad person, red for good, yellow for special powers. Village children imitated the stylized gestures of the actors – a finger placed just so or an arm or foot raised to hint an emotion or action. 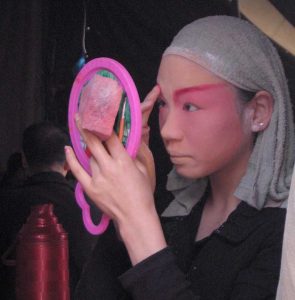 One month while I was in An Shang, the county opera troupe came for several days, Crowds of farmers – young and old – from nearby villages packed into the outdoor space, sitting on tiny stools. Captivated by the complex plots of performances, they watched for hours. Some stories went back millennia, others were more modern. The stage was a large tent; the dressing room a small space in back, abutting a muddy area where children gathered to gawk at performers making up their faces.

In the West, opera is usually for the rich, and in urban China, it has been mostly for the literati. But in An Shang village and much of rural China, opera is woven into everyday life, filled with emotions and complicated tales relying on traditions that date back thousands of years.