The Human Scale of China 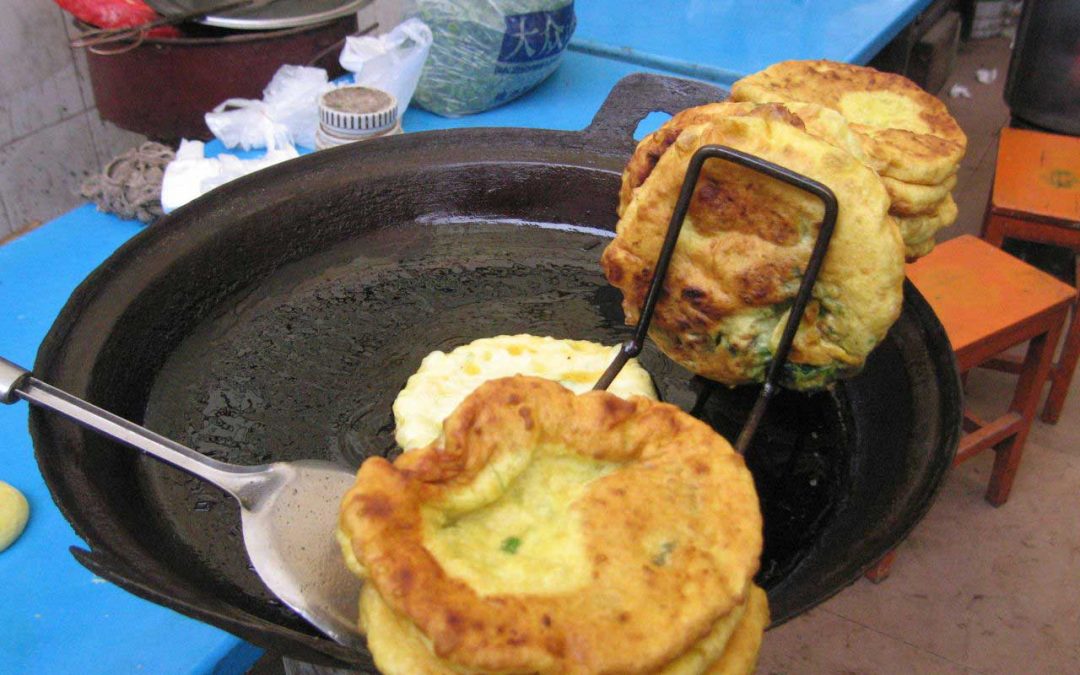 I began packing for a morning flight from Nanjing. I’d spent the day sitting, talking with colleagues, writing reports, then a banquet—all enjoyable, all productive, but distressingly sedentary. I needed to get out.

I pulled on my jacket and headed for the packed streets. Wool scarf pulled around my neck, I let the brisk air nip my ears as I wove among the walkers. It was 9:30, when the sidewalks are dense with pedestrians—all ages—talking, walking arm in arm, animated, waiting in line for a dumpling, or tasting skewered meat morsels and pan tossed dough stuffed with vegetables.

I slowed my step to inhale the pace of China, a more leisurely stride than mine—one that stops to investigate and to talk with others or ask questions of a vendor. The evening streets of China have always pulled me to them to soak up the rise and fall of conversations interspersed with car horns and the whir of electric bikes and motor scooters.

In a delightful book about how Paris fuels good writing, Eric Maisel underscores the human scale of that city—the cafes and streets, the bridges crossing the Seine, the small parks. They evoke a desire to linger and to notice. That is my exact feeling about China even though it seems improbable for a country that claims the most people, the most students, the fast 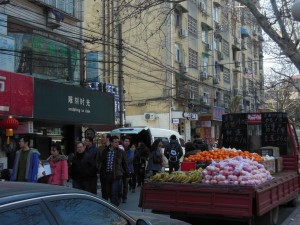 est construction of buildings and expressways. While California and New York City shops and eateries are entered purposefully to shop or eat, those of Paris and China ask you to meander and pause and try a little something.

Parts of China in the evening have always reminded me of Paris. The first time was decades ago when I walked the crowded streets of Xi’an, a city in the middle of China, its ancient wall still standing. At night, sidewalk cafes were filled with people, their small tables and chairs gently lit with fairy lights strung in the trees and along walls. Smoke rose from small charcoal grills and sizzling woks produced clouds of steam, while patrons gathered at tiny tables, talking, playing cards and Chinese chess, or sitting in silence slurping noodles. Though the cafes and shops attracted five times more people than the west could imagine, the scenes were of human scale, beckoning people to saunter into them.

I don’t always find that human scale in China. Recently in Guangzhou I tried to reach the river that cuts across the city in too short a time. New to the city, I walked fast, determined to get there. I reached the park that edged the Pearl River with only enough time to turn around and head back to the hotel. I realize now I cut through two neighborhoods that could have drawn me in to explore. I should know better than to rush through China

Better to meander, with a map and a way to find my way back to where I’m staying in case I’m not quite sure where I ended up. In Nanjing not too long ago, I headed to the bank, and then wandered unfettered into the neighborhoods behind it. Past a junior high school, then a church and a square where buses idled, waiting for passengers. I crossed small squares where I stopped to sit and watch and write a bit, to soak in the environment and what people were doing—talking, arguing, exercising on metal equipment painted in primary colors, meant for retired folk but used by all ages for limbering up or leaning against. Then on down other streets, one in a serious state of repaving. 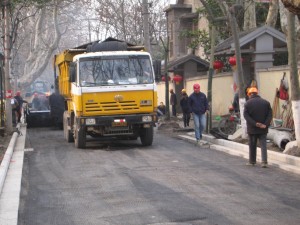 Canary yellow rollers lumbered back and forth while trucks dumped black steaming macadam. Temporary pedestrian walks hugged trees and crossed warm and sticky paving at intersections. I headed down a side alley so as not to spend the evening cleaning my shoes and stumbled across a street of large 1920s houses. They sat behind walls, the late afternoon sun glinting gold from windowpanes. Several had bright red paper lanterns
hanging from the nearly black winter bare tree branches.

These walks pull me on and on. Just one more block, one more turn, one more square or park. And then, as the sun begins to sink and long shadows edge across sidewalks, I begin to feel nervous that maybe I am making too many turns that are not in neat grids, but wander at oblique angles, probably tracing ancient paths along old farm plots. I begin to head in a direction that I think will take me back to a familiar street. It’s often farther from my home base than I thought, so the walk goes on until my legs complain. But back in my room, as the water boiler gives promise of tea, I’m filled with the satisfaction of having wandered once again into the byways of China, tasting the rhythms of every day life.