The New Normal (in China) 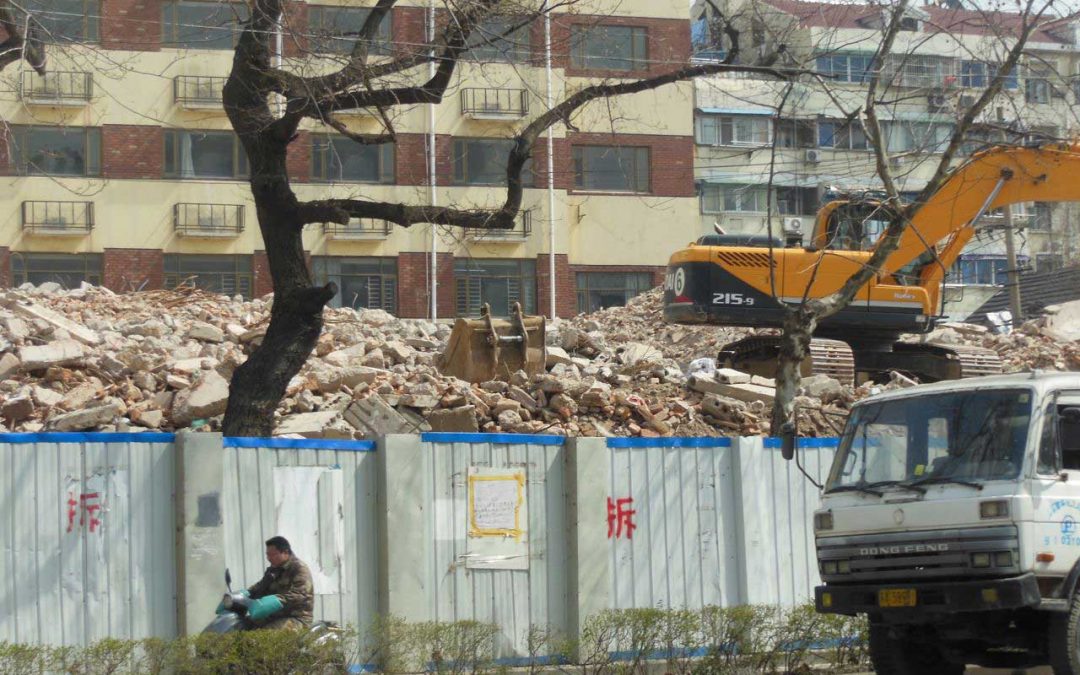 Demolition and change. The new normal in China.

In over 25 years of traveling to China I have become used to demolition. For the first several years I loved walking to Xinjiekou, the center of Nanjing, weaving through packed sidewalks of dark blue and grey clad citizens, past the money buyers trying to pry dollars from the few foreigners and into the department store where you had to wake up the clerks if you wanted to buy something.

But then excavation began—and demolition of those familiar sites. Round the clock, higher buildings went up. Subway digging began. Some of the beautiful plane trees, pruned into shapes that made leafy, cool tunnels in summer, were cut down, and Xinjiekou became unrecognizable.

I didn’t get back there for several years, and when I returned it was as if to a foreign land. 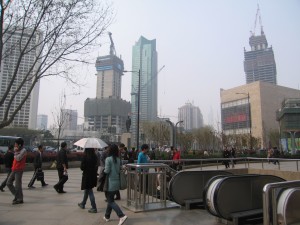 The Jinling Hotel, the tallest in Nanjing, providing a view of Purple Mountain and the rest of the city, had become a lowly tenant amid shiny, high rise giants. In all directions twenty story commercial buildings rose, high-priced department stores in their lower floors. Tunnels burrowed under the Xinjiekou intersection, forcing me and all walkers to make long underground hikes and to surface at a corner we hoped was the one we were aiming for. 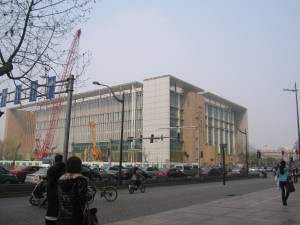 By 2000 or so, subway construction reeked havoc beyond the city center, and the blue sky seemed to have permanently disappeared because of dust and pollution. The Internet became a protest tool, sending out photos of tree-lined streets being demolished. But areas of the city had stabilized, and although demolition and construction continued, enough buildings stayed put so citizens and this foreigner could identify their locations.

Then last year, I headed for the shops near Nanjing Normal University where I knew I could get just the write pens and writing pads. I left the ATM at the Bank of China on Beijing Road and ambled along Ninghai Road, taking in the pedestrians, peering through the ivy-clad fence of a preschool I had once visited, and resisting the urge to explore a side street that climbed up a hill. Watching for unruly traffic, I stepped off the curb and looked across the street at the little stores frequented by students and neighborhood residents. And stared. Beyond the swish of motorbikes, taxis, and vans stood a half block pile of rubble. Two bright orange steam shovels gnawed at its edges. I stood there, stunned. “My” stationary store and that street of little shops had become heaps of concrete and broken timbers. The demolition pulled at my heart. 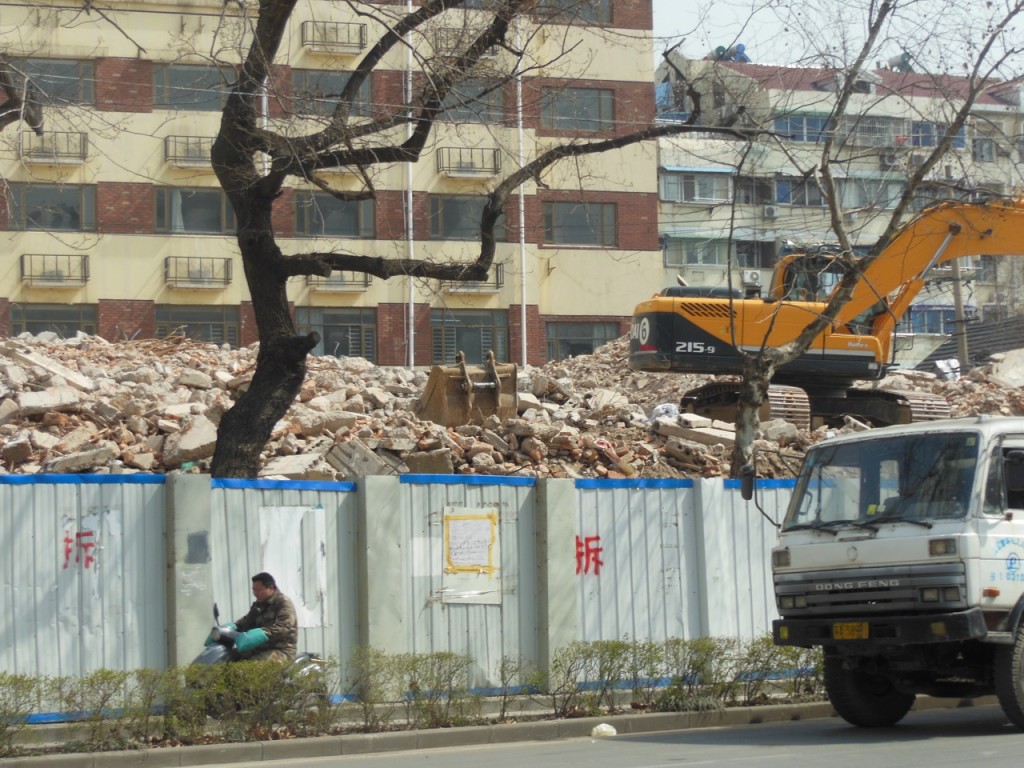 I walked a few steps. Memories moved in slow motion across my consciousness. The small clothing shop where Huang Rensong, my feisty research partner, had dragged me so we could both have the same style silk shirt. The day I ran into Yue Meiyun who had no idea I was in China. We sat on the window ledge of a shop in the autumn sun trading family news, delighting in the idea that though from opposite ends of the earth we had run across each other unexpectedly in the midst of a crowded Nanjing street.

I wandered on, past the half-crushed magazine and newspaper kiosk where the owner’s shaggy white dog once sat viewing the street scenes, bowl of water and food carefully placed beside it. It would have been better if it were just rubble. A three-story house at the end of the block had been sliced in two–the steamed dumpling shop flattened where once, day or night students lined up for snacks. A lone survivor, a tabby cat, crawled across its roof, crouched cautiously and peered over the edge. 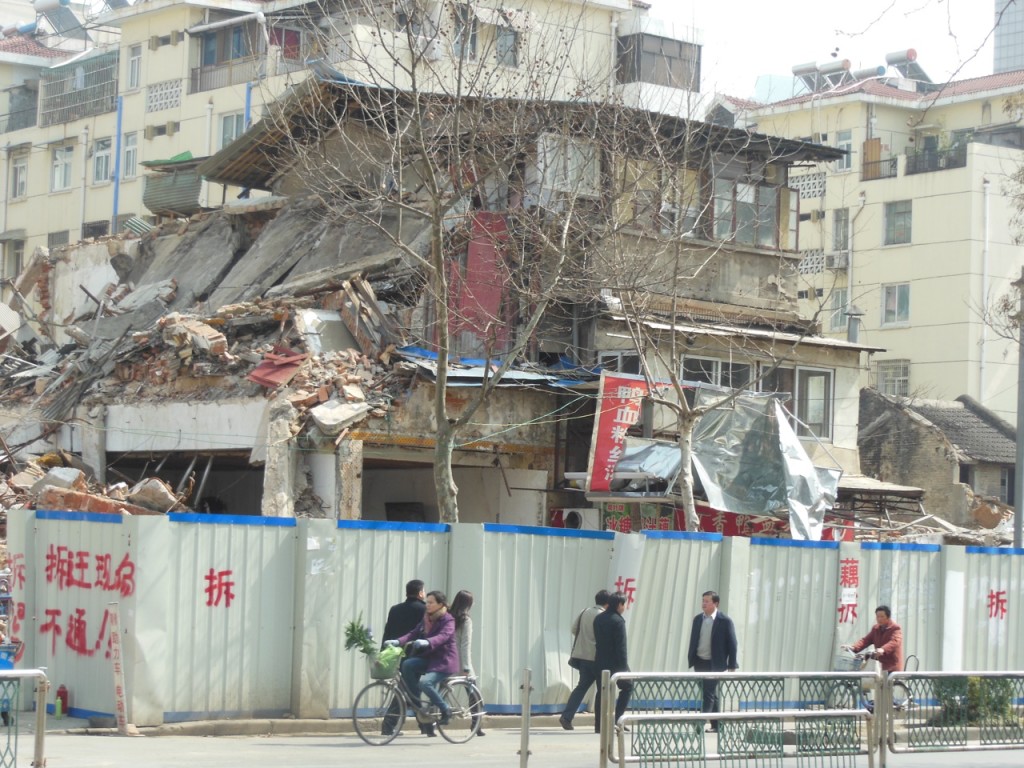 I had watched from a hotel room in one city as apartment residents across the street packed all their belongings into trucks, obviously being removed to another location so their building could be torn down. This has been the new normal in China for years now. Some of the places I’ve seen demolished, like the old 1920s houses on the edge of the French Concession in Shanghai, were horrible inside. Rotten walls, impossibly old, leaky plumbing and probably structurally unsound.

Even so, with demolition go memories and living patterns that are woven into people’s lives. Being wrenched into a new, shiny modernity is sometimes difficult even for a foreigner.